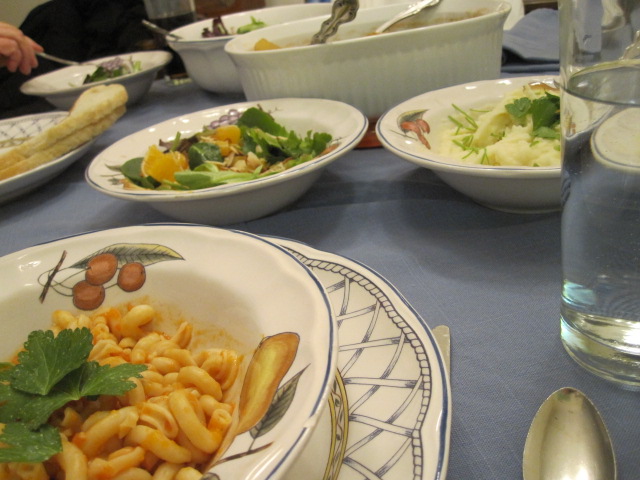 When my daughter announced that she was becoming a vegan, I reacted in typical mom fashion.  “What are we going to eat when you come for dinner?” I asked.  “No meat, no fish, no dairy.  What’s left?!”  That was then.

This is now.  My refrigerator is stocked with non-dairy yogurts, non-dairy milks, and veggies from A (arugula) to Z (zucchini).  Plastic bowls of cut-up fruit jostle for space beside stacked containers of cooked cauliflower flowerets and ginger candied carrots.

Having mastered the art of “mystery rice” meals for our dinner get-togethers, this summer I decided to go exotic and learned how to pronounce, cook, and eat quinoa.   Then I added spice to my life (and our dinners).  I became an urban farmer:  today pots of fragrant basil, parsley, and cilantro adorn the entrance to my balcony.

My daughter’s vegan lifestyle led me to rethink my own food choices and to move beyond the same old staples.  Although I have not become a vegan, I have discovered new tastes and the joys of creative cooking.   Many traditional recipes for soups and sauces can become deliciously vegan.   I have had so much fun experimenting.  I know you will, too.

Editor’s Note: Six months later, my Mom did become a vegan!  She enjoyed the meals we shared together so much that she decided to make it a permanent dietary shift!