Home → Interviews → Christy Morgan, aka “The Blissful Chef,” Shares Her Joy of Cooking 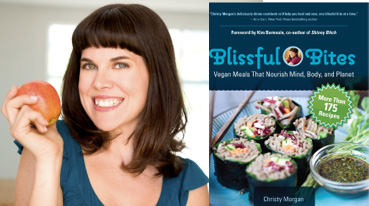 Christy Morgan is the author of Blissful Bites by BenBella Books, and is well-known online through her blog as The Blissful Chef.

Christy Morgan designs elegant, healthful, vegan meals.  The vegan macrobiotic chef and author of the cookbook Blissful Bites discovered the benefits of a vegan diet while she was working in Hollywood as a fashion designer about nine years ago. Her experience with fashion has given Christy a unique perspective:  “Presentation is the one way that my fashion background influenced my career as a chef: we eat first with our eyes.  You always want to make your meals beautiful. Even when I am just eating by myself, I like to make my food pretty.”

Christy recalls her early days as a vegan, “At the time, there weren’t many vegan restaurants and vegan convenience foods, so I decided to learn how to cook. I realized I loved to cook!” Christy found she wanted to become a vegan chef because of this love, and enrolled at a macrobiotic culinary school, the Natural Epicurean Academy of Culinary Arts.  The culinary school emphasized holistic nutrition and macrobiotic way of cooking.  Christy has adopted that approach.

For folks who are thinking about trying a macrobiotic diet, Christy recommends two books:  Macrobiotics for Dummies and The Hip Chick’s Guide to Macrobiotics, as well as the books of Christina Pirello, and her website, christinacooks.com.  Christy also suggests foods which will provide a good start and an easy transition to a macrobiotic diet:  whole grains (millet, quinoa, and brown rice) and green veggies (kale, collard greens, bok choy, and broccoli).  She adds some colorful and simple advice: “Eat vibrant fruits and veggies, all the colors of the rainbow.”

Christy enjoys sharing her food knowledge and expertise with others. “I like to empower people to transform their lives through making changes in their diets.  It’s also gratifying to bring back the tradition of learning to cook for ourselves and passing on recipes like our grandparents did with our parents.”

Thanks for following your bliss, Christy, and giving us some of your recipes for success!